As per usual I need to preface this blog post with an apology to my avid readers out there (moms/grandmas). I have no legitimate excuse for my excessive delay other then my addiction to the Game of Thrones series and that Kenny bought me a gym membership… However, to make up for it, I have some excellent photos for you guys! This post will finally conclude our trip to Zugspitze! Holy cow, that was a long time ago…

Mountain peaks are really cold, guys. Once the exhilaration wore off I could no longer feel my face. Thus, due to that and my admittedly incessant whining, we decided it was time to go! Lucky for us, a train was headed out within the hour. Except that the mountainside is too steep for trains and we had to take another lift car just to get to the train station. Kenny was hoping he had seen the last of these…

Fortunately, this one was a larger than the last. Plus! There was the softest most adorable Lassie-dog on it! The “Lassie-dog” was named Duke. 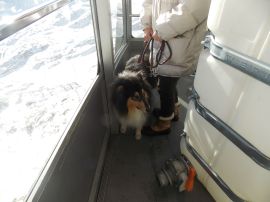 Contrary to my initial thought, the dog was named after the monarchical station, rather than the university. At least that’s what I gathered from his owner’s blank stares in reaction to my Blue Devils reference. My awkwardness strikes again.

The ride was short but, naturally, I managed a few breathtaking photography feats for you guys. 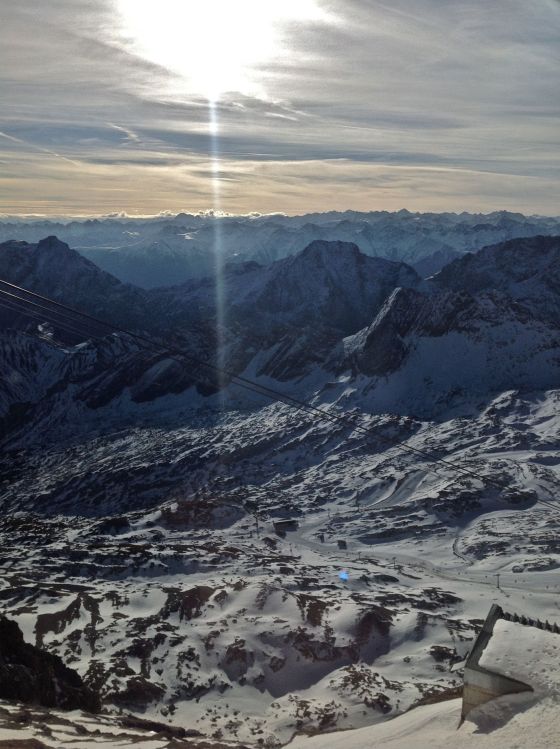 Not even the Hogwarts Express could work with those angles.

Also, awww… look how cute we are.

And here is my happy Kenny about to step on solid ground.

The train station turned out to be quite the charming little stop.

The gift shop was pretty standard. Although we did find giant gloves for Kenny’s giant hands! The best part is that he has not even lost one yet; its been months! Additionally, there was an outdoor café. Clearly, it’s a popular place.

The view was incredible. The lack of guard rails provided equal parts excitement and terror.

Also, there are some truly remarkable snowboarders out there, check this out. 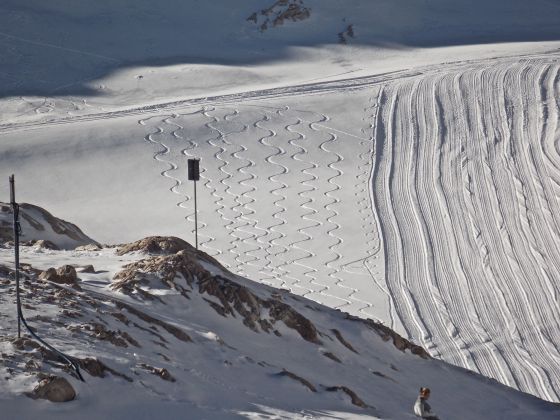 Those zigs and zags were intense.

Next, we visited the highest chapel in Germany: Maria Heimsuchung.

Apparently this chapel, known as the “Chapel of Visitation” was consecrated by the Joseph Cardinal Ratzinger before he became Pope Benedict XVI: very impressive. The inside was modest, yet beautiful.

The quaint little chapel was well suited for the serenity of the mountainside.

We only had a few minutes before the train was to arrive so we took it all in, one last time.

Kenny and I were both exhausted when we got on the train. We had such an amazing day. Here I am with a happy, tired Kenny.

3 thoughts on “The Descent”