Ladies and Gentleman, after a hiatus of a year we are back. There is no legitimate excuse… we did plenty of cool stuff last year. Although, I will attribute it to that, cool stuff, cool friends, and just overall goof-offery took up all of my time. Anyway! Now we are on an entirely different adventure; ’tis new and exciting! Kenny and I are currently living in Giresun, Turkey. Giresun is a little city just to the east of the middle part of the country on the coast of the Black Sea: new country, new culture, new language, new, new, new! Thus, since we are braving a new world, I’ve decided to get this blog going again so we can share the adventure with our friends, family, and the general blog-o-sphere.

Originally, for my first post, I was planning on showing everyone our new apartment with pictures of how we’ve made it our a home. However, about three days after my arrival we were thrown for a loop and told we have to move! To make a long story short our building has strict rules against having a dog in the apartment and everyone was claiming ignorance and innocence. Kenny and I were pretty upset (naturally, I was bummed, he was ticked); as we were promised everything was handled and now we were stuck in an unfortunate situation, not to mention, our apartment was beautiful. C’est la vie, right? After I threw myself a “short” (Kenny would disagree) pity party we decided an apartment search could be fun! We’ve never done that before and life is an adventure, right?

How could anyone say no to this face?

This adventure turned out to be a bit of a roller coaster. We were really beginning to worry when Kenny’s teammate revealed to us that it was a part of their religion. Their belief is that they are not to have dogs in the dwelling as it interrupts their five times daily prayer and disallows the admittance of angels. After hearing that little piece of interesting cultural news we were literally in panic mode. Many of you that know me can attest to the fact that in times of great stress I can have a penchant for the dramatic… basically, meaning poor, poor Kenny. Luckily, after about two weeks, the third time is the charm! We found an amazing and even better place on the mountainside. Needless to say, we are beyond relieved. We are moving in this Tuesday and could not be more excited! I figured as a farewell to this apartment I’d take you guys on a short run through it’s highlight reel…

As many of you know I moved overseas very late this year and ended up missing my darling husband’s birthday. This was forgiven solely on the promise we would make a cake when I got there. Now, I’m not sure if it was due to last year’s cheesecake fiasco (my fault, it was gross) or because he was hungry in the store and picked it on a whim, but Kenny decided he wanted to make birthday eclairs… 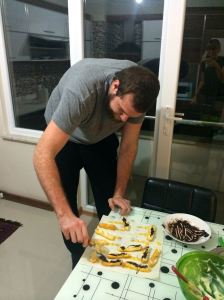 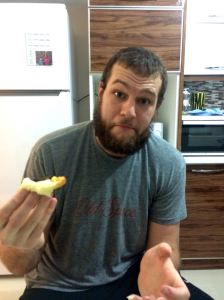 Albeit a bit unorthodox they were actually quite good and the birthday boy was pleased so: mission accomplished. The next series of photos are from our version of Thanksgiving. Unfortunately, the team was gone over the holiday so we decided to forgo tradition and make Thanksgiving breakfast for dinner! Mainly because it sounded good and it was shockingly difficult to find a turkey in Turkey. Plus Kenny fancies himself a Pancake Master. Although, this is what happens when you let Kenny cook…

The largest pancakes that ever were.

Obviously, those two guys didn’t work out too well… although “Master” Chef Kenny was not discouraged. The last two lucky pancakes even got flip flap jacked.

It was truly special, guys. So, basically we feasted, it was delicious, and it totally counts. 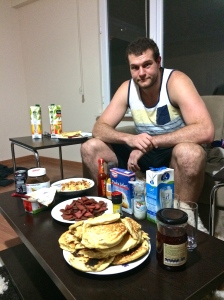 Now, the past two years in Germany we have met wonderful people, drank delicious beer, and saw amazing sights. In my opinion, the only thing missing (Kenny will disagree) was excellent German food. Whoa, calm down, guys. That is not to say we did not have good food in Germany. I am just not a pork and potatoes kind of girl, leading to years of salads and foods not German. Excellent culturally relevant food is one thing that Turkey is not lacking in. I love the mediterranean sort of cuisine. Favorite thing: dolmas, or grape leaves, or stuffed cabbage… many names. Whatever it is, it is gooooood, my friends.

DOLMAS AND OTHER YUM.

Also, being right on the Black Sea like we are, the fish is so fresh and wonderful. I learned the word “kilciksiz” too, because they are big fans of bone-in fish… and I am not: not, at all.

Apparently, Giresun is famous for it’s sardines. Actually, the tiny restaurant we are going to tonight was featured in the Times. Kenneth Eugene, though fan of all food, is partial to their Kofte, or Turkish meatballs. Fun fact: we were told each region makes a completely different version of Kofte. So different in fact, Ken’s teammates from the south of Turkey hate the Black Sea Kofte. Weird, eh? Ken says he’s gotta try ’em all.

So, in conclusion we are adjusting to culture shock, the food is delicious, and are no longer homeless. Great news all around! Also, our new place has three bedrooms… *ahem* visitors welcome:)  Love to all; my next post will be bigger and more exciting and coming very soon. 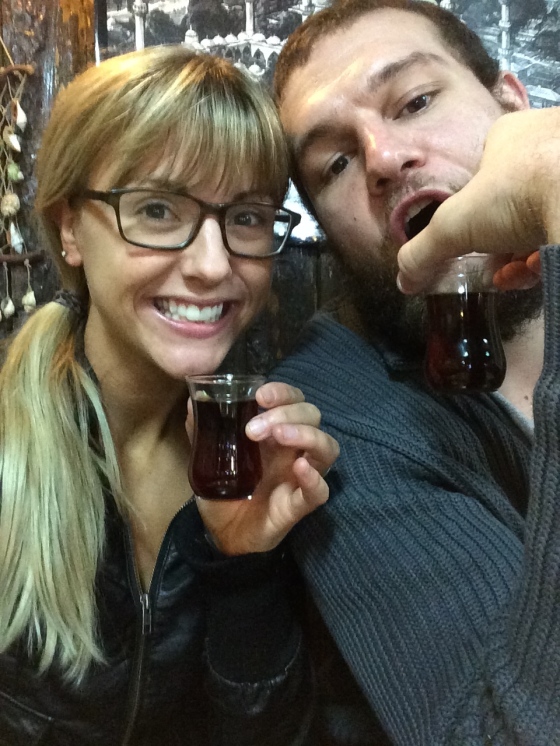