Yes, I stand by that title. Bonjour, bonjour!  I’ve got to admit, guys… I’m a little proud of myself for not just posting once and then falling off the face of the earth this time. Patting myself on the back … END_OF_DOCUMENT_TOKEN_TO_BE_REPLACED

Bonjour all! The Kenny’s, Ted and I are thrilled to announce our newest residency: Monthey, Switzerland! We are so happy to be continuing our overseas adventure together and hoooly cow, this place is stunning. I don’t know how you guys are at geography, but Monthey is located on the French side of the country, a little south of Lake Geneva, near the Rhone River. As you cannot escape the beauty of the Swiss Alps in this country, it provides such an incredible landscape to gaze and gawk at. We are so fortunate to get to live in such a beautiful place.

Check out our patio view.

This is all rather new to us, as it is our first experience in a French speaking land. It certainly presents new, fun little challenges daily. Though, nothing that awkward forced laughter and Google Translate can’t handle.

We’ve only been here a month and 10 days and this place is already starting to feel like home. The team was very accommodating with our living situation. Many of you know that to be a source of great anxiety at the start of every season for me and it is safe to say we are very pleased! There is plenty of room for Beeps to run around like a maniac (and for visitors!) and even a little garden for the Tedster.

Anywho! To make a long story short, we are happy! Now, on to our adventures.

We had visited Montreux a few weeks ago and with the intention of taking the train up to Rochers-de-Naye Mountain. The timing didn’t work out then so we made plans to come back and instead visited the city’s castle. So before our mountain scaling adventure, let me first show you the castle we toured; as it is also quite beautiful and merits a mention.

AKA… Chillon Castle. How cool is the word Chateau though, am I right? I mean I gotta say Deutschland… Chateau kicks Burg’s butt every time.

Chateau de Chillon is a medieval castle. Medieval. Meaning the first written mention of the castle appears in 1150. What? I mean to say: that its freaking nuts. Though it did take another century to become the imposing structure it is today and in its current form it is the result of several centuries of constant renovations and restoring… but still! 1150. Wowza.

It is quite a sight to behold. Standing strong on the banks of Lake Geneva with the Swiss Alps it’s majestic backdrop. The place has everything you’d look for in a castle: turrets, a moat, thick stone walls, a hole in the ground toilet, and even underground torture tunnels, really the whole nine yards. Kenny and I have seen many castles in our day and the first thing we both said was, this place ain’t defendable. Every other major castle we’ve seen has been up a mountaintop. Thus you can just pick intruders off one by one with your mad archery skills. Chillon though: lake one side, (hello ships!) and mountain side on the other, meaning the intruders have the high ground. So basically Kenny and I were walking in thinking these guys were idiots. Turns out… it was only taken over a handful of times. Largely due to the fact it was mostly used as a prison and nobody really gave a crap about it.

He wrote a poem titled: The Prisoner of Chillon, thus immortalizing the castle and its imposing dungeons. The poem was about Bonivard, a monk that was imprisoned there for years, basically just because he ticked off the Savoys, (main castle dudes from 1150-1536) and guys, the poem is long, but boy is it beautiful.

Lord Byron was so enamored with the castle that he carved his name into one of the pillars and can still be seen today!!! 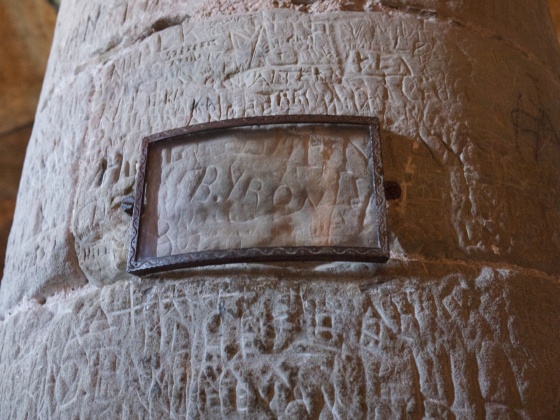 These tunnels were spectacular. They are cut right into the rock base of the castle. Thus, making them very narrow, uneven and believe it or not, difficult to navigate with a 28 pound squirming child in your arms (See horrible quality photo below.) So I was in and out, but you can really feel the history down there; it was truly amazing… in a dark and twisted sort of way.

Possibly the worst photo I’ve ever posted, but you get the idea.

Though I did find something down there of immeasurable value… 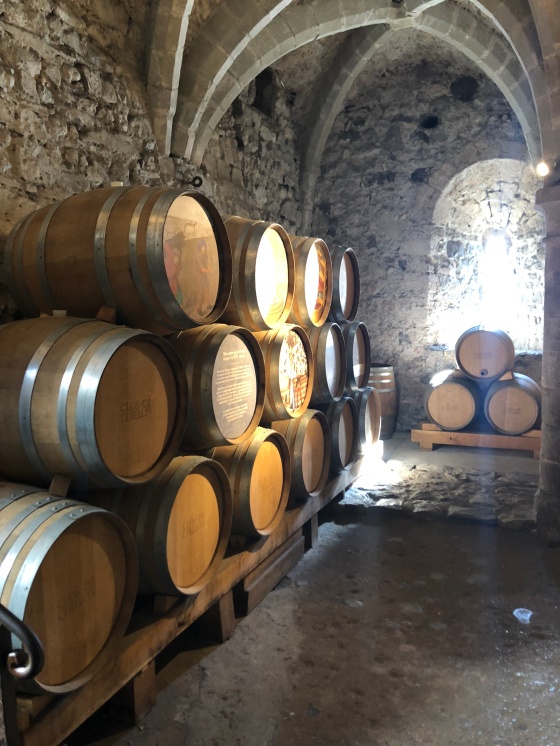 Chillon, being a medieval castle and one mainly used for arms and prisoners, does not possess the lavish gaudiness of the Bavarian estates we are used to. It certainly has its own charm though, and we enjoyed it all the same.

Kenny3 in a Where’s Waldo situation wielding his great sword.

“So much space to run” – Beeps thoughts

K4 tired after battle aka running from mom like a maniac

As you can see from the above photos our little guy got a souvenir from the castle gift shop. Oh my goodness did he love this sword, almost as much as he loved hitting mommy with it. Oddly enough, he did not hit his father once. Needless to say, he lost his sword privileges pretty early on.

Moments before thwacking mom on the head 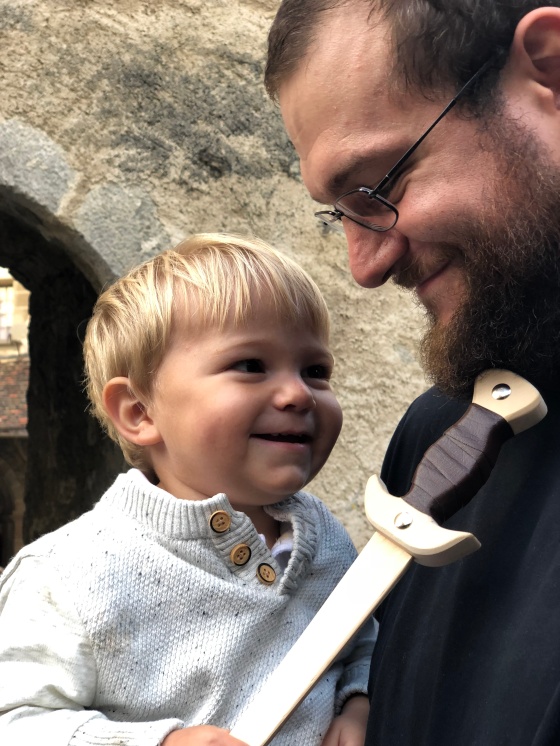 We did not get a chance to tour the whole place but what we did see was pretty awesome. All the typical things you’d find in a fortress were present. Such as…

Thing #1: knight’s armor display. Again I ask, why were people so tiny back then? 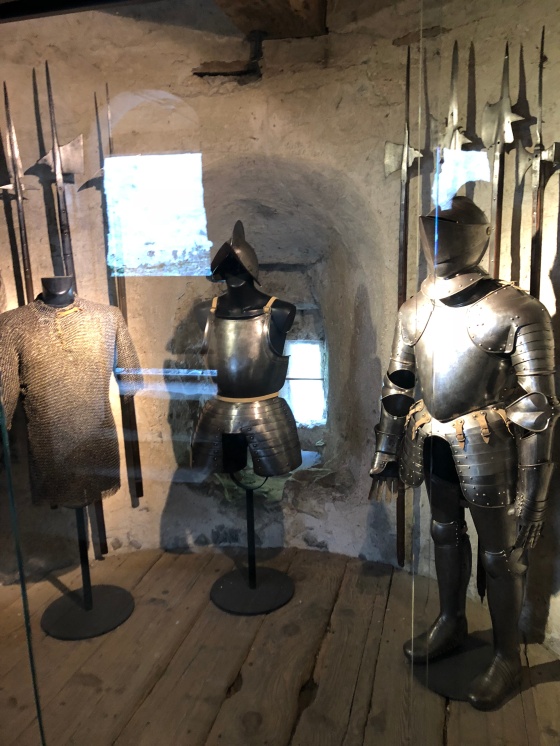 The life of a giant.

Making fun of him for this, as it always does, threw him into his, “I would’ve absolutely dominated back in those days” tangent. Clearly though, this cannot be disputed; just look at the Mountain (GOT ref #1) 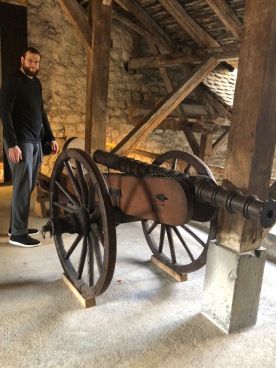 “Hey, stand next to that” 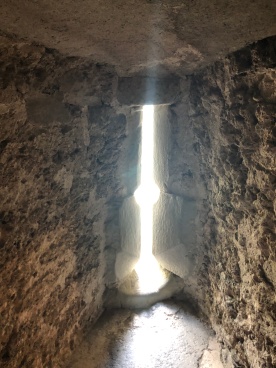 Thing #4: Strange toilet with on opening to the land beyond.

The heads up toilet room was complete with some rather excellent cartoons depicting medieval pooping practices but I foolishly did not snap any photos of them. One of the great failures of my life.

As you can imagine these castle commonplaces provided a sort of comfort for us… as only pooping and murdering holes could.

A new, fun thing we got to see was a medieval cookbook! I’ve never seen its equal.

Way to utilize the whole page guys… not. So wasteful. 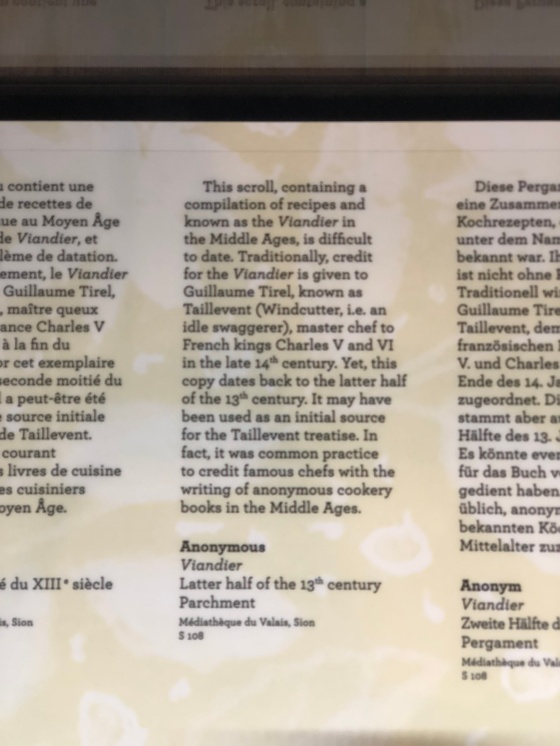 Chillon Castle holds a cooking workshop inspired by the medieval cookbook. You solely use ingredients available during those times and even cook in a cauldron. They had a pretty primitive dining table set up to showcase how they would’ve dined back in the day. Not much to it really. Very simple, just a few wooden tables with a raised table at the head for the Lords and Ladies (think Winterfell… not King’s Landing… GOT #2)

The last castle photo I’ll post was something that, in it’s intricate design, was rather out of place in a castle that was, in itself, pretty rudimentary. My photos do not do the hall justice, unfortunately. It is quite impressive in person. 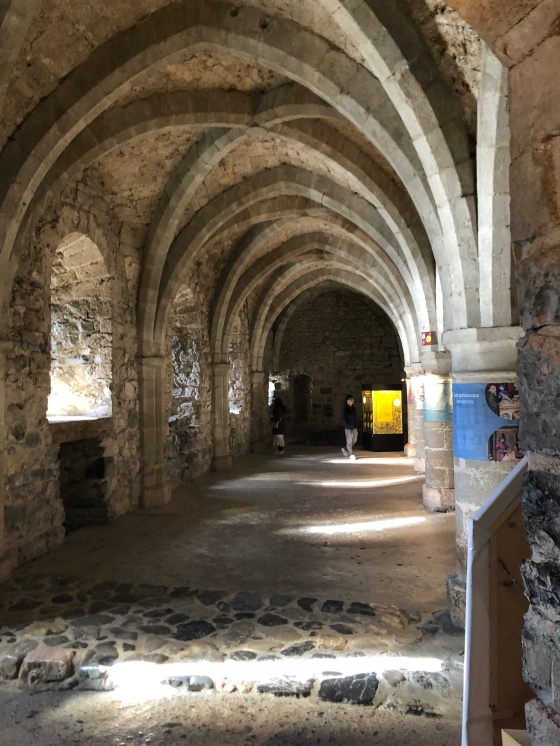 As usual Beeps was unimpressed.

The castle was very cool to see but it was almost overshadowed by the beauty of the Montreux Riviera.

This place is stunning. Before I sign off I need to share some of my photos. Plus, the excellent Freddy Mercury statue. 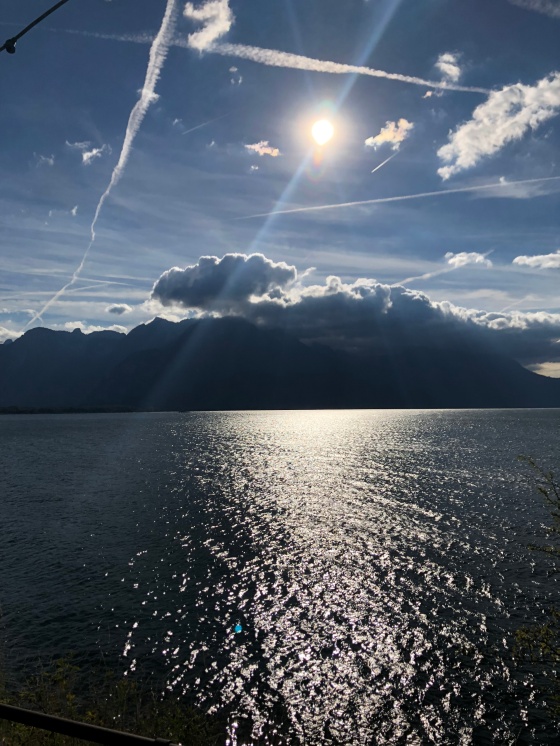 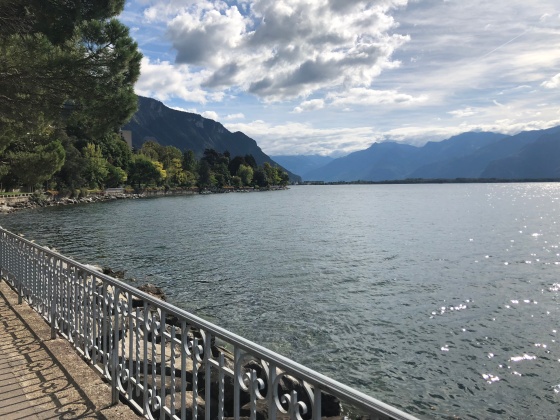 It was breathtaking. Again, Beeps was unimpressed. 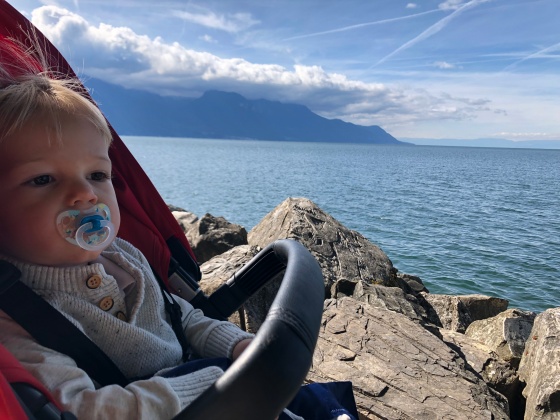 Even when a giant boat went by… it even blew the foghorn… nothing.

“Not turning around, don’t care”

Not even Freddy Mercury impressed him.

“BIRDS. THERE ARE BIRDS OVER THERE.”

Kid is a tough critic. Only playing. Playing and birds. 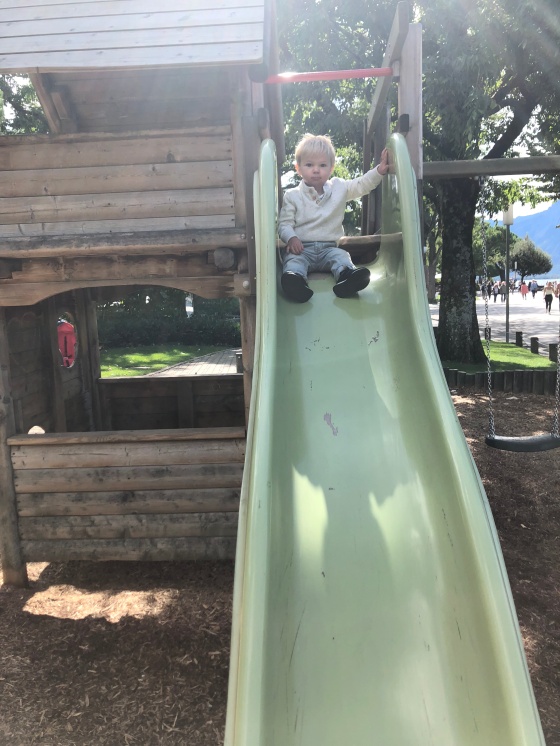 “I will give you a hint of a smile atop this slide, mother, no more”

Speaking of playing and smiling and also (mainly) because here, in real life, Kenny is still watching Beeps without complaint… let me share with you some photos from the festival we attended! Lots of happy baby time there! Where enchanting history and stunning scenery failed, carnival rides and farm animals triumphed.

Okay, so for the past month in Monthey we’ve been seeing these strange signs of an old British woman sipping tea and the words “It’s tea time!” with dates listed. This is literally it… no info about what we are supposed to go crazy at…

What? Also where? Why even? When, I’ll give you. You’ve made When clear.

What am I supposed to get from that? Very strange and vague ad. Anyway, fast forward to the 9th when Kenny gets home and says there is a festival in the town over we should take Beeps to tomorrow. Super, I’m in. We get there and these are plastered all around. Mystery solved! but also what the heck! I could be been taking Beeps to this thing all along.

Because holy cow he was a big fan.

Sooooooo happy on this car ride. 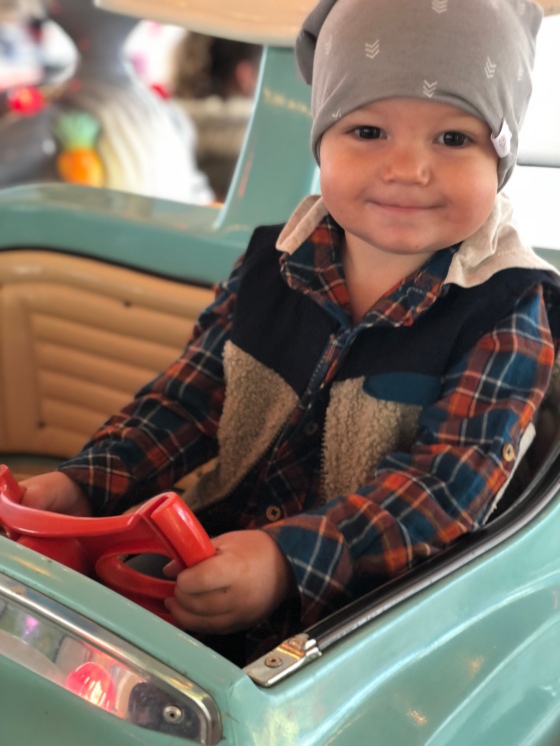 Until we had to pry him off it, then came the shrieks. Short lived though as we soon entered the random farm animal tent.

Though looking back on my photos… I see, true to mom form, the majority of my photos are not of animals but are just pictures of Beeps looking at animals… Oops, but I mean, we’ve all seen a goat right? 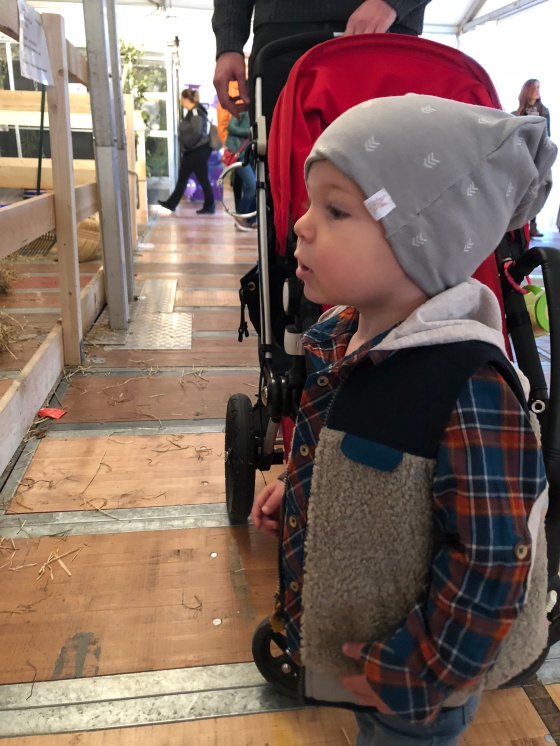 Keeping his distance from the cows

Thinking this is cool but remembering when he got to pet and feed the goats in America, so……. 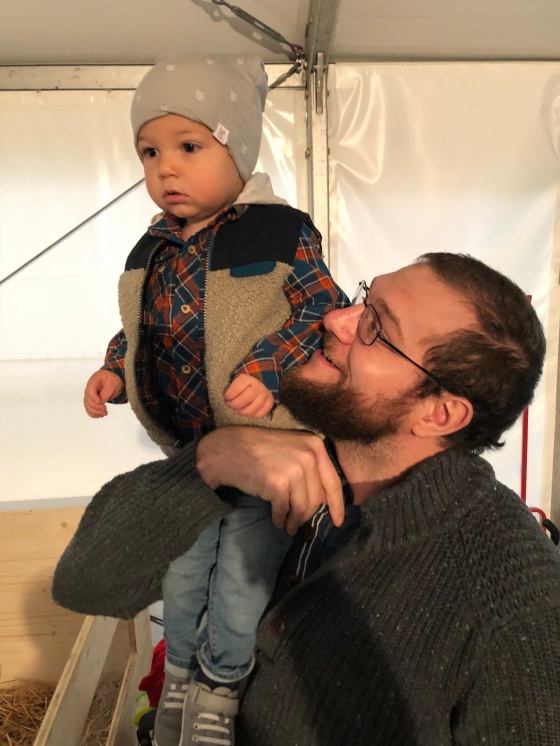 Watching the baby pigs aggressively nurse with mild fear in his eyes and not thinking its funny when I say they remind me of him. 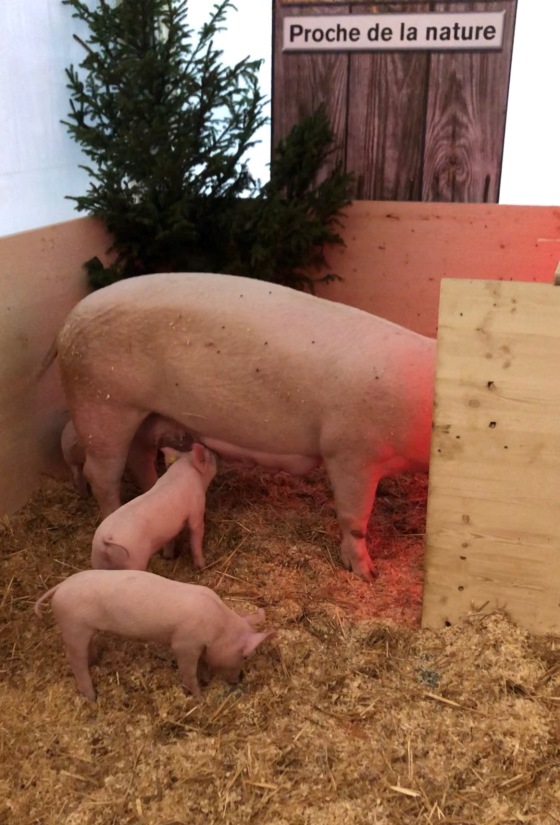 There are 4 more pigs behind Mommy Pig and at one point they were all nursing/ravaging her and honestly it gave me anxiety.

Mini horse! Yes! I got another one.

After the farm tour, Kenny had to win his son a prize. This time, said prize, came in the form of a tiny beige turtle. That of which was thrown to the ground instantly and it might’ve just been me but I definitely sensed a bit of mockery coming from the kid. One more turn on the merry-go-round car ride and we were off for home. Another excellent day for the Frease’s:)

I hope you enjoyed my photos and ramblings. More to come from our trip to Rochers-de-Naye! 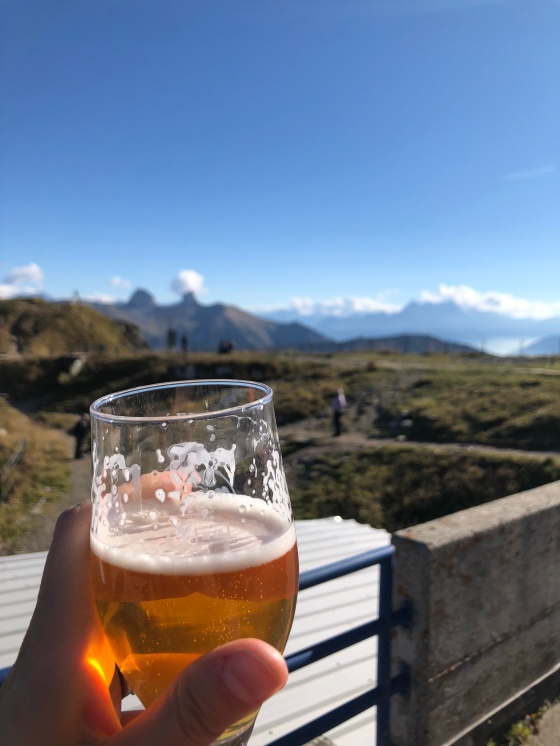