FINALLY, it is here. This is a big week for the Frease’s of Germany. A day we have been anticipating since it was made official. COREY AND RACHEL ARE COMING TOMORROW. I know that you are all super jealous of the two of them; we would be as well. These honeymooning lovebirds get to spend a glorious week in our company. Worry not blog-readers, I will try and do our time together justice.

Also, I would like to take this time to reflect on another countdown of ours. Currently, we have 49 days until our tentative flight home for the summer. Can you guys believe it? Time really flies! Also, to keep the theme alive, we have 141 days until our wedding. Naturally, this fun little fact incites equal parts excitement and panic.

Moving forward, not much has happened since my last post. Except, OH YEAH, we went to PRAGUE! A couple of weeks ago Kenny got four days off of practice; obviously, we took full advantage. Unbeknownst to us, Prague was less than a five-hour drive away. Also, bonus, our friend Brendan Coleman from Xavier is living in Prague at the moment. He’s on a program called “TEFL Worldwide” where he helps Czechs learn English. (BTW he sent me a link… definitely looking into this for next year.) So, Kenny booked our hotel that Thursday and we left Sunday morning. We got an incredible deal on an amazing hotel right in Old Town. We felt super fancy when we walked into our room and saw this: 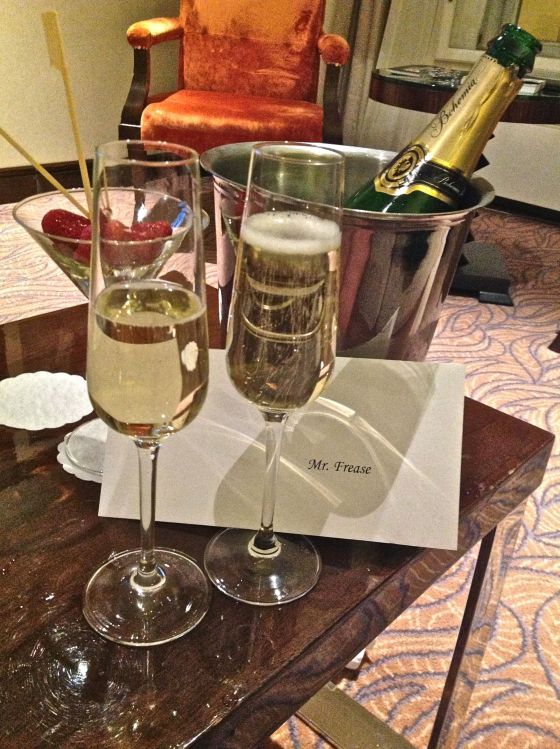 Also, I have to post photos of the chandelier from the lobby. Each crystal is suspended from a separate string = coolest chandelier I’ve ever seen. 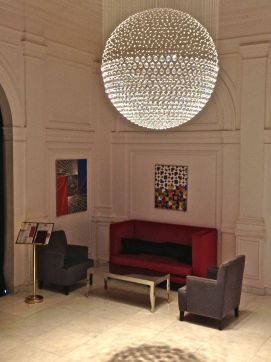 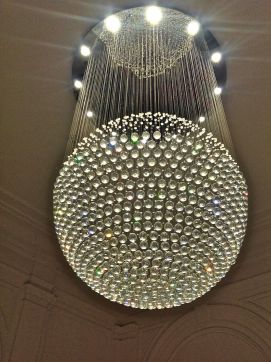 Anyway, after we toasted to our unconditional love and downed the bottle of champagne, we made plans to meet up with our friend Brendan. Brendan took us to a little restaurant he likes that serves genuine Czech cuisine. It was very good! And the beer was very, very good! Speaking of that sweet nectar, after dinner he took us to a charming little bar with an impressive array of beers on tap. My deepest regret is that I did not get a picture of him and Kenny together. C’est la vie, next time! After we said our goodbyes we were anxious to get back to the hotel. There was a king-sized bubble bath calling my name. Also, there was a casino in the hotel for Kenny, need I say more?

In my opinion, one of the greatest parts about staying in a hotel is the complimentary breakfast. My attempts to rouse my husband were futile. His late night in the casino turned him into an angry morning bear so I gave up and dined solo. I felt badly because; let me tell you, this was a breakfast fit for a king. Though, forgiveness came easily when he saw the big pile of pastries I brought back for him! We had a big day ahead of us so we set out to feed the hangry (hungry + angry. Go ahead and use it) bear. The Palladium, Prague’s giant shopping center, was directly across from our hotel. When I say giant… 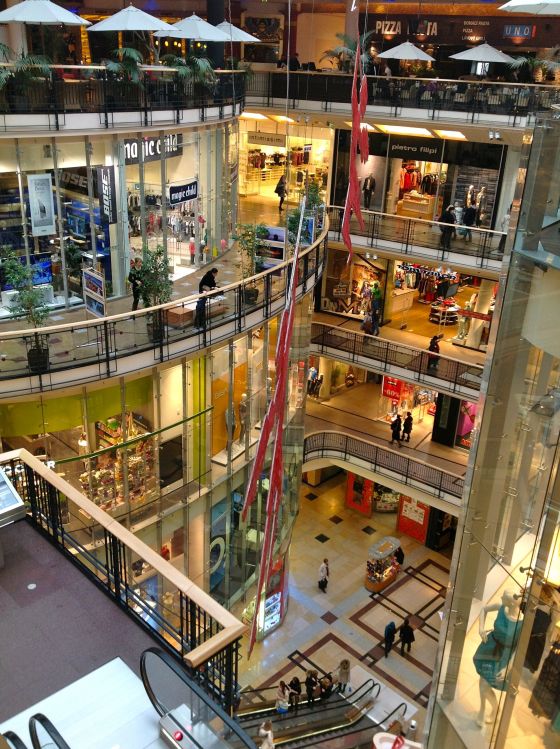 I mean giant! Naturally Kenny beelined for the fried chicken. After Kenny consumed mass quantities of KFC we set out for our adventure! That is until, I saw it: Starbucks, in all her glory. 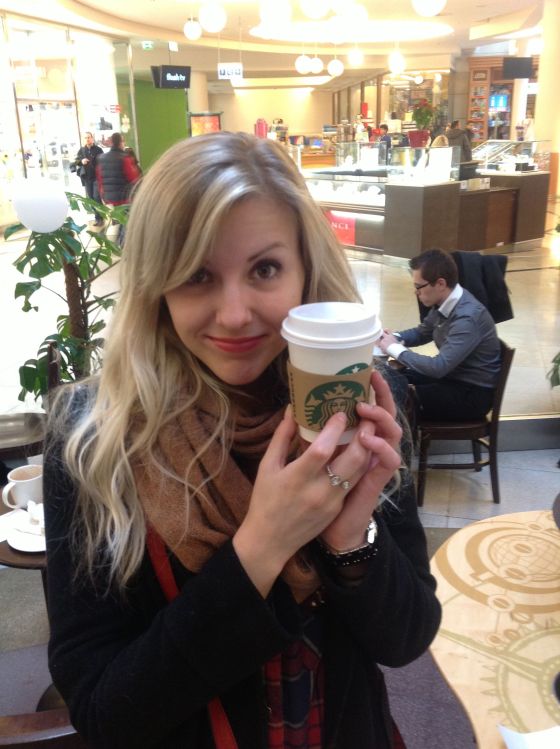 Now, finally, we were off! We stopped back at the hotel to confirm our route. The concierge drew us up a foolproof map and sent us on our merry way. We were first to take bus #8 and get off at specified location and then take bus #24. This is where it all went wrong. I would like to preface this journey by reminding you people that Kenny and I are not city-folk. We have no idea how to use the public transportation system. We were like two newborn baby turtle hatchlings trying to find the ocean for the first time. The funny thing is that we were completely unaware of our blinding incompetence until we got to the tram stop and the doors opened in front of us. There were people with tickets, some people didn’t have tickets, there was pushing and staring and babies crying. It was a mess. We ran away confused. I said we should go back and ask the concierge how to do it; Kenny said that was too awkward. Kenny offered a cab; I said it would get too expensive. We were really in a pickle here, guys. Finally we came to the conclusion that we should just jump on the #8 bus. I mean, what could go wrong?

The answer to that question is: a lot. A lot went wrong. We ended up on bus #8 for a good 45 minutes to an hour. Let it be known that I wanted to get off the bus  when we first started to realize these we not the correct tram stop names. But Kenny just kept saying, “It’ll loop around,” “It’s gotta loop around,” “It’s going to loop around soon.” It became his mantra for the day. 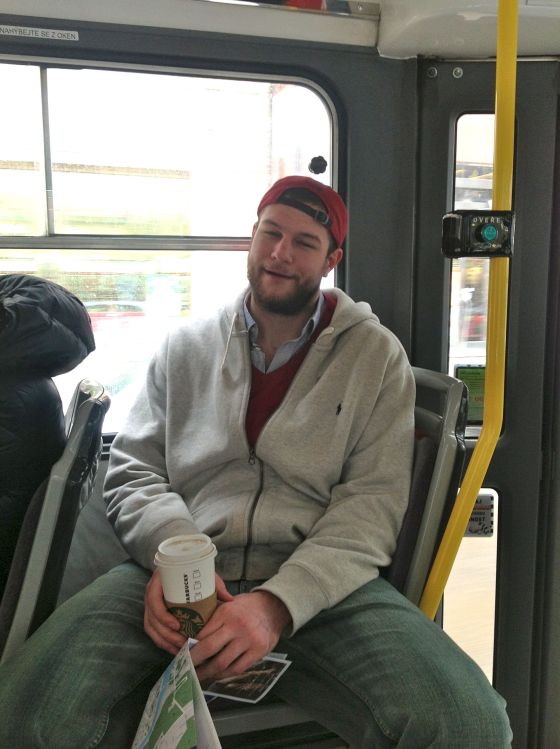 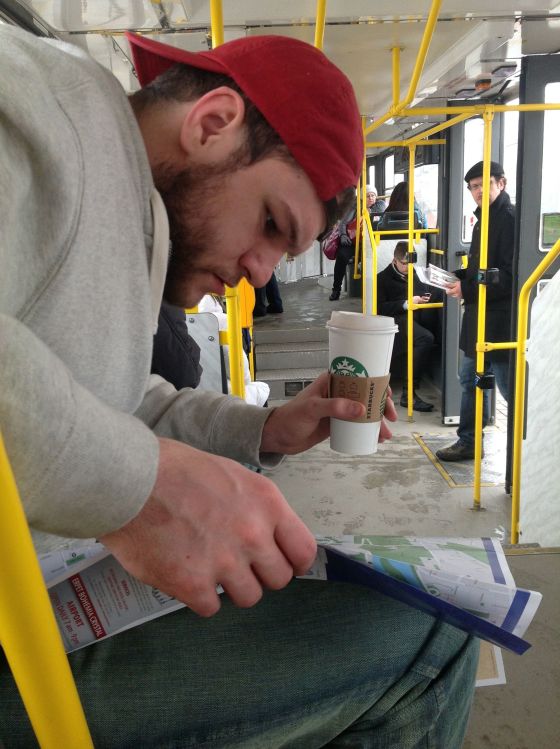 “It will for sure loop around” 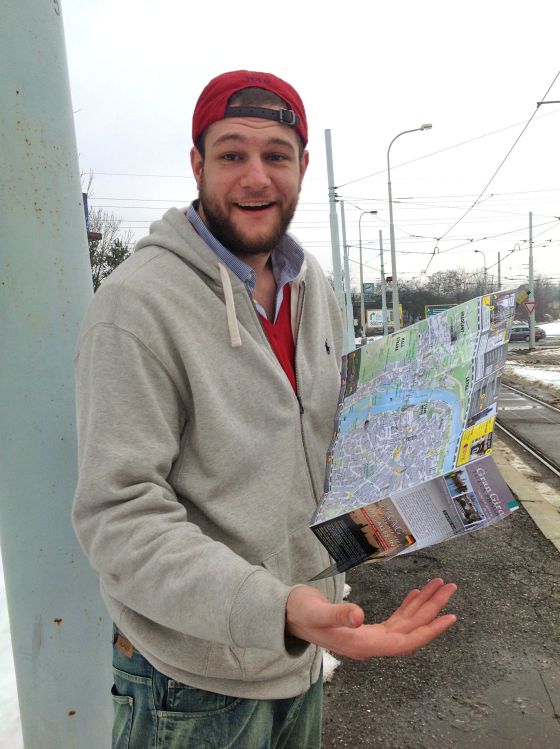 “I thought it would loop around”

We did get to see some beautiful local artwork… 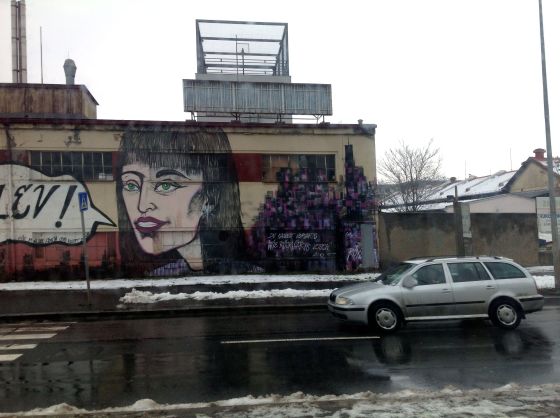 This poor woman was lost with us… 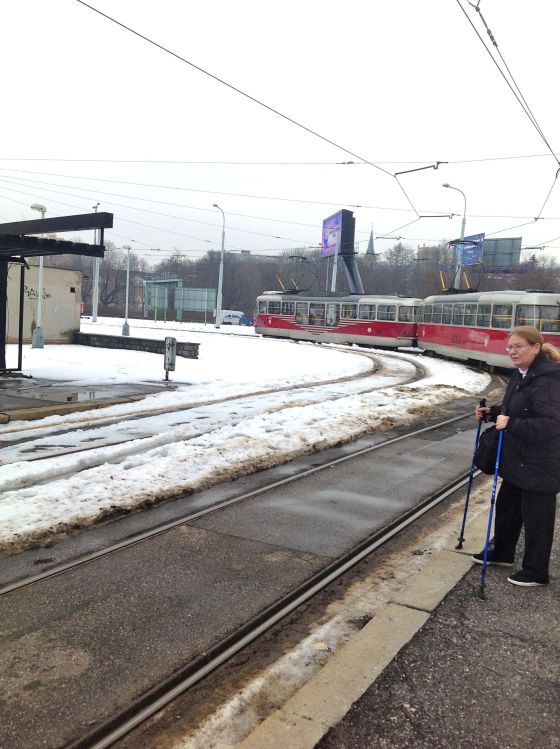 Apparently, we went in the exact opposite direction. There was nothing left to do but hop on another bus and head back to where we started. The tram took us about 20 minutes down the way when decided to cut our losses and grab the first cab we saw. 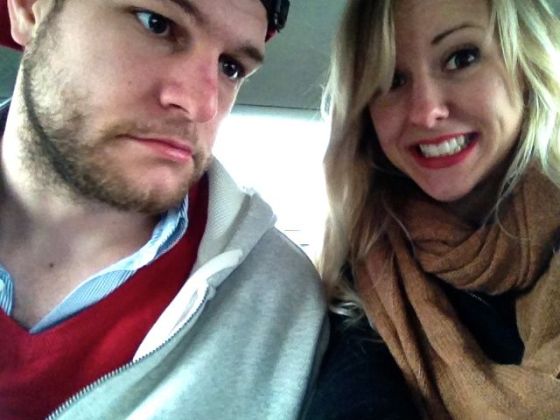 “I can’t believe it didn’t loop around”

Finally we made it to Prague Castle! We were so relieved to be back on the map we almost didn’t notice the lack of people in the courtyard… 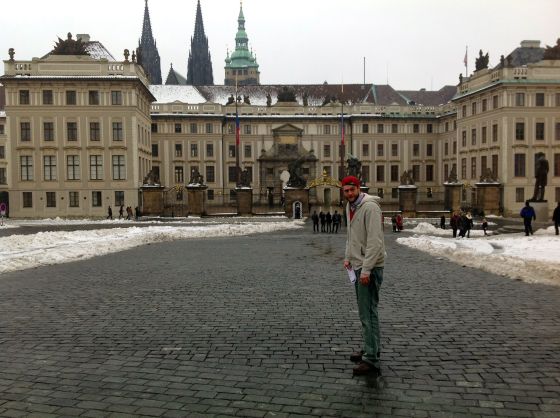 The castle was closed for the day. Imagine that! So we just snapped some pictures of the stone cold guardsmen underneath some brutal statues. 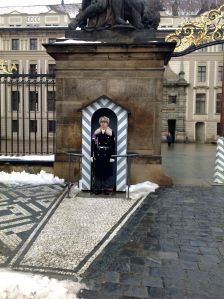 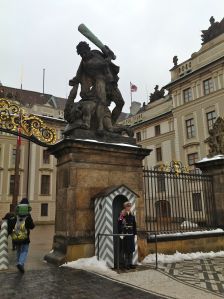 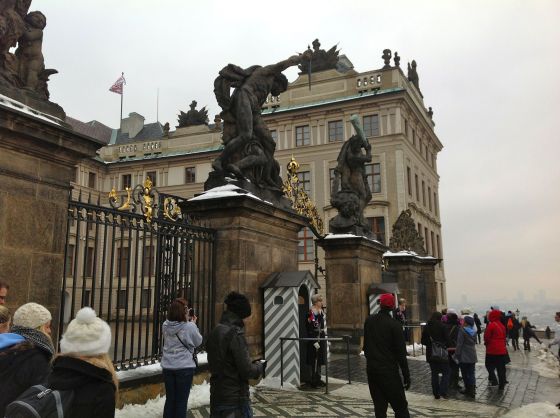 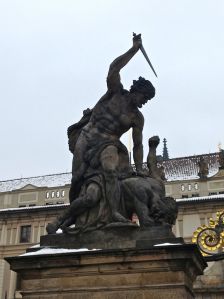 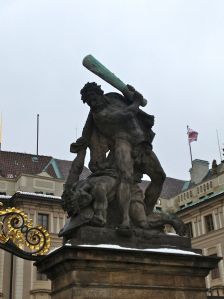 Also there was an awesome view to the right of the castle, but I will post that next time in order to do it justice. 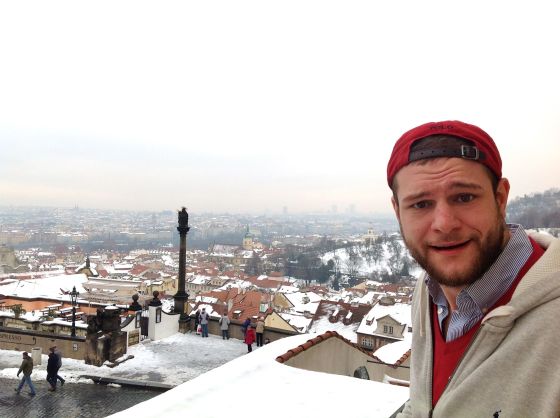 Anyway, back to our trip from hell. After we saw as much as we could, we began our trek home. Our path lead us down the side streets of Prague. Ken and I must be spoiled in the pristinely clean and always salted streets of Germany, because this place was awful. It was nothing but brown slush and garbage. We had three maps, two more maps than you need really, and they all turned out to be completely useless in these side streets. However, we did see this little gem drawn on a fence outside of the vast courtyard. 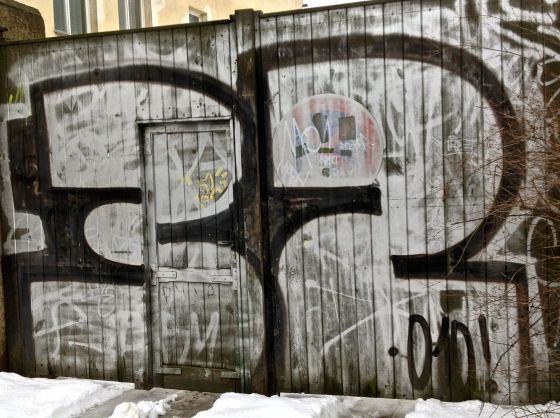 To make a long story short, about 30 minutes and a pair of boots later we located the river and got a cab (R.I.P. Tan Leather Boots.)

We got to the hotel and headed straight to the hot tub to melt away our troubles. In order to use the hotel “spa” you are supposed to the wear the “spa slippers.” Needless to say they fit Kenny like a glove. 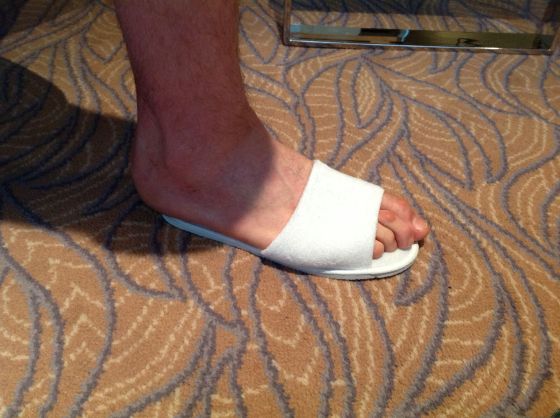 After our hot tub dip and a surprise sauna visit we headed back to our room to get cleaned up. Due to the failure that was our day Kenny and I decided we would treat ourselves to a lovely dinner. Let me tell you, lovely doesn’t even begin to describe the perfection of the meal we consumed. We went to a restaurant called “La Dégustation.” The menu was in a fancy shmancy envelope. 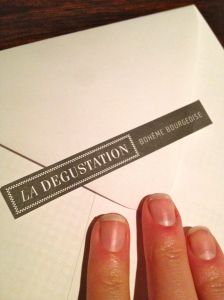 There was a choice between a six or an eleven course meal. After a great debate I convinced Kenny that a six course meal would be sufficient. 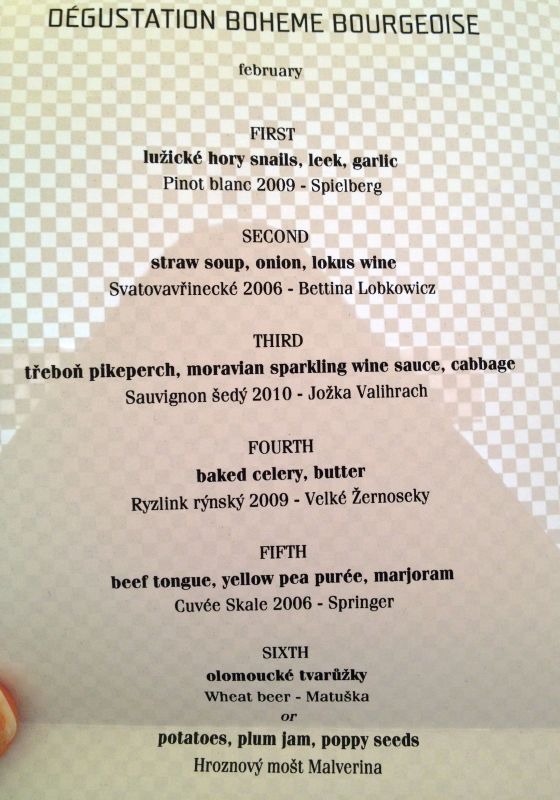 This meal was art. It definitely made up for the day’s shortcomings. Here is Kenny looking super excited about the fourth course in front of us. 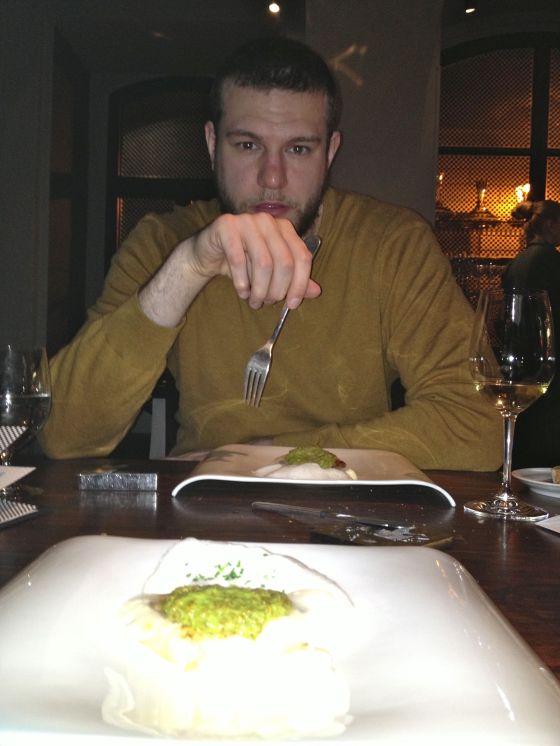 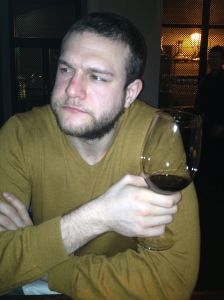 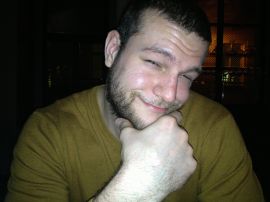 That about concludes our fantastic first day in Prague! Despite all of the setbacks I still had a wonderful time with my husband. It really made for a great memory. Cheers!